Alyssa accompanied him to the police station for his parole meeting. It was August 26, 2009. He was her captor–a 58 year old pedophile that had held her prisoner since she was eleven; she was now 29. During her time in captivity she had given birth to two of his children and was put through unmentionable abuse that included the seemingly benign (compared to all the other monstrous things she endured), but insidious, changing of her name.

An officer took Alyssa aside and asked for her name; at the time the police didn’t know she was actually Jaycee Lee Dugard, the little girl that disappeared eighteen years ago and that was being kept against her will. For whatever reasons looming ominously in her mind (whether from fear or from years of abusive conditioning) she replied as she had been instructed to do, with the fictitious name her tormentor gave her—Alyssa. The police asked her again; something wasn’t quite right about her demeanor and the information she was giving them, information scripted by her captor. Once more she gave them “Alyssa”. Finally, a female officer took her aside to a private room and asked her again what her name was. Jaycee responded that she couldn’t say it but, she could write it.

It was like a piece of me came back.”Jaycee Dugard

From birth, there is a building up of beliefs (true or not) that is a direct result of the layering-on of experience; one experience happens and then another and another, one blanketing the other and making us reassess the former events and developing in us notions that may or may not reflect reality. The learning curve, hopefully, never ends; previously formed ideas about reality are being obliterated by new experience that reforms our “truth”. It’s easy to take for granted our belief system; it’s who we are, familiar and known. Deeply buried by reinforcement, some notions can be very difficult to dig out and remove, as in the case of Jaycee Dugard.

Dugard’s words reverberate in my head—“a piece of me came back”–she suddenly knew the truth. What would happen if I did that, if I wrote my name?

Would I suddenly become aware of the deeply seated inaccuracies  that I take for granted? Obviously not, but I wonder if that’s not what I do each time I paint–face the fear of uncertainty and learn about my true self (maybe that’s what makes art therapeutic). The “beauty” of art is self expression—the opportunity for, and ability of, the artist to say what he believes—his personal truth—about himself and the world; no other activity encourages one to speak through his work like this. The artist must be brave and authentic.

Dugard was brave. When she courageously wrote her name, “Jaycee Lee Dugard”, she created a work of art; it was there for the world to see; it was perfect in its’ truth. It was freedom. 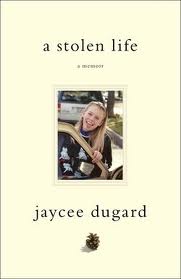 •At Home With Books
•Reading Between Pages
•Violet Dubrinsky

“Meaning is only meaningful to the person creating or receiving. A painter should never look for meaning as it will elude him/her. A bit like happiness. Happiness will find you, but not if you go looking for it. Looking for meaning before actually creating could easily take away the joy…”

Marcia Clare Kuperberg
The Painter’s Tongue is a visual arts journal with an emphasis on philosophy and a focus on the artist’s own words, and seeks to bring like-minded individuals together for a meaningful exchange of ideas. It is my "thinking out loud, if you will, my personal search for meaning. TPT welcomes contributors as Guest Authors or through Speaking on Art, an offering of article excerpts from around the World Wide Web. Read more...