Why Do You Really Create Art: Or How To Survive In A Concentration Camp

For success, like happiness, cannot be pursued; it must ensue, and it only does so as the unintended side effect of one’s personal dedication to a cause greater than oneself or as the by-product of one’s surrender to a person other than oneself.”  Viktor Frankl

What gives someone the wearwithal to do something difficult? What is the primal, motivating force behind persevering through hardship? From something as simple as reading a book that’s hard to understand, to creating art (or whatever you do) when it can cause angst and be downright stressful, why do you put yourself through it? Why does pursuing one’s passion, even through difficulty, fulfill something deep within us?

I’ve often thought about our American Heroes, crammed into landing crafts on D-Day, waiting for what must have seemed like sure death, waiting to leave their vomit filled vessels to face the hail of enemy bullets raining in. How were they able to force themselves out of what little protection they had from the boat into the barrage that awaited them? How did they force their legs to move through such an onslaught? 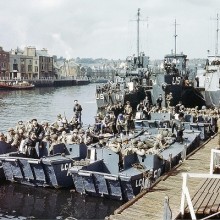 Here is a fascinating look at history–Then & Now–with images of wartime locations in 1944 and then the same locations, shot from the exact same angle, in 2014. Left click on an image and drag your mouse to the right to change from 1944 to 2014. Scroll down for more images.

The answer comes to me years later as I reflect on the massive tornado that rumbled through several surrounding counties, and eventually through my neighborhood, in 1984:

“It was nighttime. The TV had gone out. I was standing over my wife, she holding our infant daughter, sitting on the couch with her granny. The roar got very loud and I turned to see the front door rattling on it’s hinges. Glass from the windows broke and blew past us, and I saw the wall-to-wall carpet buckle the length of the room.

In seconds all was quite. I looked out the back door at the Pontiac we had just purchased–it lay flat under an oak tree. I opened the front door to meet the top limbs of another huge oak sprawled prone towards the house.

Suddenly, from out of the dark, I could hear the eerie faint cries for help. The best analogy I can come up with for the sound is like that you would imagine coming from the damned crying up out of Hell. I wanted to go and help them but, the thing was, I couldn’t move. I literally could not move my legs out the door. It was as if I had no control over them. I could feel them, but not move them.

The cries for help got louder and louder. I kept telling myself that I had to go and help, thinking at the same time about the possible downed power-lines touching the trees and ground. Gradually I realized something greater than myself in the rising desperation of the distant voices and was able to step forward into the blackness.” 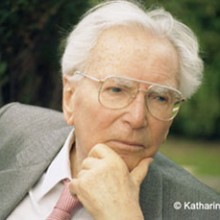 Viktor Frankl 1905 – 1997 was an Austrian neurologist and psychiatrist as well as the founder of logo therapy, which is a form of existential analysis. His best selling book Man’s Search For Meaning chronicles his experiences as a concentration camp inmate.

A Holocaust survivor, Frankl persevered because the Nazi’s couldn’t take his heart–that part of him that was his free-will and that transcends every situation–and prevent him from seeking out his “God”.  Being an inmate “led him to discover the importance of finding meaning in all forms of existence, even the most brutal ones, and thus, a reason to continue living.” (Wikipedia)

I believe my work, my calling in life, is my search for this meaning. It’s why the difficulties and hard won battles are worth doing. Frankl found meaning in extreme hardship. I find meaning in my struggles also.