Shadow Of The Bear: The Power Of Art

In the fall it appears–The Shadow Of The Bear–a gigantic silhouette resembling, well, a bear’s shadow, cast onto a mountain near Cashiers, North Carolina. It can be viewed along Route 64, at around 5:30, on a clear evening. Having just arrived at The Jarrett House Inn for our 31st anniversary, my wife and I rushed from Dillsboro towards Cashiers to find “Rhodes Big View Overlook”, the area I had read about where we could witness this phenomenon first hand.

And sharing the experience with so many others…looking, photographing…made it even more significant.”

We arrived a bit late; the bear had become shaped more like a mouse from the sun’s wane but it was still quite moving. And sharing the experience with so many others (maybe a hundred or so) that had parked their cars on the side of the road and gathered on the narrow shoulder–looking, photographing–made it an event–made it even more significant.

I can’t help but wonder how something as simple as a shadow brings so many, including myself, to witness it. After all it is just a shadow. Maybe it’s a combination of things… 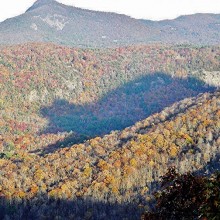 Even so, there is something here that transcends the everyday, transcends familiarity and size, something satisfying to the soul. It’s the seemingly simple things in life that give us the deepest satisfaction I think, like my grandson preferring to play with sticks than with expensive toys. And I say “seemingly” because it goes deep, what’s going on here. I can’t quite define it but I know it made me feel safe and comfortable–it was like I left all my cares in the car and stood before the shadow in perfect calm.


I think art does the same thing–takes us to another place–another “realm”–when we stand before it. We can get swept away by it’s power, like I felt in front of the shadow. It transcends it’s materialness. 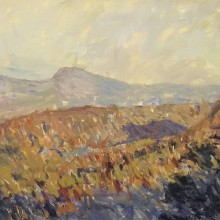 I relate to the shadow in another way too in my work. I paint many large, isolated objects, and I see these works–the way these images are presented–as symbolic and spiritual; they seem to represent some “inner” condition of man. That’s how I see The Shadow Of The Bear also.

There are numerous articles and photos of the shadow online, including the links here to romanticasheville.com, visitnc.com, and msnbc.com. Type in “shadow of the bear nc”.