I am an artist with degrees in both Fine Arts and Science who, although exposed to Western values, was driven by life force to the Eastern way of perceiving and reflecting the world. In my numerous communications with fellow Western artists, including those I have encountered in my Sumi-e classes, I have found that the visual and philosophical differences between Western and Eastern art are not sufficiently understood. It is also important to note that I do not consider myself an expert in the subject matter, but a student who is on an infinite journey of exploring life and myself. 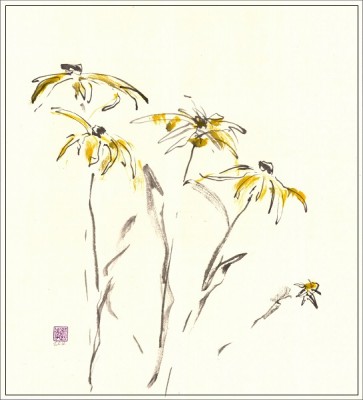 Art in cultures has always represented the artist's reflection of the world he/she lives in. Throughout the centuries, the artist’s credo, i.e., his set of beliefs, has influenced his/her expression. The Western culture has been guided by the belief in an intelligent, judgmental creator, called God, a Superior Power who was always on the watch. This has alienated humans from nature and created states of inferiority. Accordingly, literature and art have depicted that state of human psyche, with great emphasis on worship and admiration of that superior power. 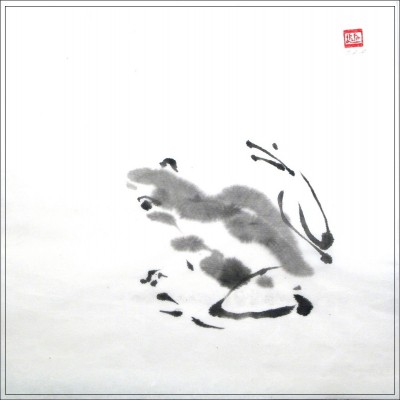 In an effort to liberate themselves from the control of the omnipotent and omnipresent God, humans took a totally opposite direction and started to regard the world as an entity run by mechanical rules and lacking intelligence. In this world only humans possess intelligence and awareness. As a result, humans have taken the role of God into their hands, faced with the difficulties of assuming this powerful role, in an effort to give answers to the unanswerable. Where God was the judge, the individual becomes the authority. Trying to make sense of this, the world is seen in opposites: good and bad, right and wrong, black and white, disconnected from nature and lonely. This view is apparent in many works of Western modern art where you see the artist’s alienation from nature and his/her subjective and arbitrary interpretation of everything.

...Difficult and easy
bring about each other-
Long and short
reveal each other-
High and low
support each other...”Tao Te Ching Verse2

The goal of the Eastern individual is to dissolve the ego, to develop and cultivate inner values and understanding of one's true nature and experience it as part of the whole.

Differences in techniques and approaches of Western and Eastern artistic expression can be understood only if these fundamentally different views are discerned. In the West, art is based on external values showing the detailed description of the subject matter as seen and experienced by the artist. Even paintings depicting the beauty of Nature are manifestations of the artist's technical skills, showing detailed description influenced by his/her own personal mood or ideas.

The Eastern artist is not preoccupied with Self. He/she does not try to depict the external descriptive qualities of the subject matter, but aims to understand the spirit, the essence and the inner meaning of it. Once the artist has comprehended the essence of the subject, he/she expresses this understanding with a seemingly effortless spontaneous gesture. As effortless as it seems, it is supported by extensive practicing of complex techniques .

Based on my familiarity with Western art, yet the affinity with the Eastern understanding of the world, in my artistic expression I have opted for Sumi-e (Japanese brush painting) style...with Western sensibilities.

“If we study Japanese art, we see a man who is undoubtedly wise, philosophical and intelligent, who spends his time doing what?... He studies a single blade of grass”  Vincent van Gogh

I am a Sumi-e, artist and teacher with Art and Science degrees. My life is inspired by oriental philosophies such as Taoism and Zen Buddhism, and my paintings and drawings are influenced by their teachings. In my Sumi-e paintings my pursuit is to render the spirit or chi in the subject matter rather than creating resemblances.

I am a Sumi-e, artist and teacher with Art and Science degrees. My life is inspired by oriental philosophies such as Taoism and Zen Buddhism, and my paintings and drawings are influenced by their teachings. In my Sumi-e paintings my pursuit is to render the spirit or chi in the subject matter rather than creating resemblances.