LOSING MY LUNCH IN MY ART

I suffer from motion sickness (kinetosis), always have. Things like riding in a car around the winding, mountain roads of North Carolina, sitting on a ferris wheel at the county fair, even swinging at the park, has usually made me nauseous to one degree or another.

Worse case scenario-I lose my lunch and/or become incapacitated for a good part of the day. It’s interesting, in the case of riding in a car, if I’m driving I don’t get sick–something about having control of the motion I think. One of the most sickening experiences I’ve had as an adult was in a 3D, animated movie theatre that gave the illusion you’re moving; it’s awful even to think about. 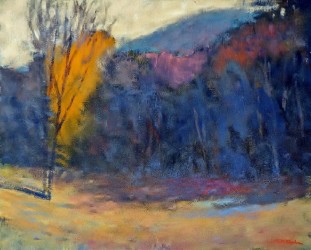 Even so, I think I am enamored of motion. I use to have a recurring dream (I hope there’s no dark meaning behind it) that I could fly. I would get a fast, running start and fling my body forward like Superman. I swooshed around at great speed just above the ground.

I tell you this because I think it has some impact on how I see and paint. My work–the way I apply the medium–involves much movement and dynamics. I dislike a static look and seem to automatically employ conventions such as cross-diagonals and broken, quick strokes to create an image. The first name I had for my studio was Rushing Trees. It was taken from a painting I did of a group of trees that appeared to be blowing and swaying in the wind; they looked like they were, in fact, rushing to and fro. It described my way of seeing—movement within nature. I see this in just about everything I do .

Structural emphasis takes a back seat to my emphasis on flow and movement. I think there is a desire to feel the unsteadiness of having been on a ride; funny considering my afore mentioned malady. But, conversely, I have an affinity for objects that may well appear solemn and calm but that were built with a brush full of intensity and force. Maybe it is this contrast that attracts me.

“Try your painting out for value by taking a digital image, and then, in a paint program of your choice, adjust the colors to grey tones. Black and white, etc. will tell you how your values are holding up, and also teach you how values differ between each color.”

Suzanne Southerton
The Painter’s Tongue is a visual arts journal with an emphasis on philosophy and a focus on the artist’s own words, and seeks to bring like-minded individuals together for a meaningful exchange of ideas. It is my "thinking out loud, if you will, my personal search for meaning. TPT welcomes contributors as Guest Authors or through Speaking on Art, an offering of article excerpts from around the World Wide Web. Read more...