There are certain things I hear people say–words in conversation, maybe just in passing, or things overheard–that stay with me. They seem kind of important at the time but really present themselves later on, in my thoughts, when I seem to need them most.

One famous person I remember saying about her success that she just found what she did best and focused on that. Her words actually come to mind quite often, I guess because I’m trying to find my way with my work. Like everybody, I have some skills that are better than others and I’ve wondered if I should try to improve on the lesser one’s or focus on the things of which I’m more proficient.

You can’t be everything to everybody and though I love it all–color, texture, value, movement, etc., I have propensities toward some things more than others. So to answer my own question, I want to improve on it all because it all matters to some degree or another but, at the same time, I want to exploit who I am–what I’m best at. I don’t want to be something I am not and inevitably I don’t think that would be successful for me. 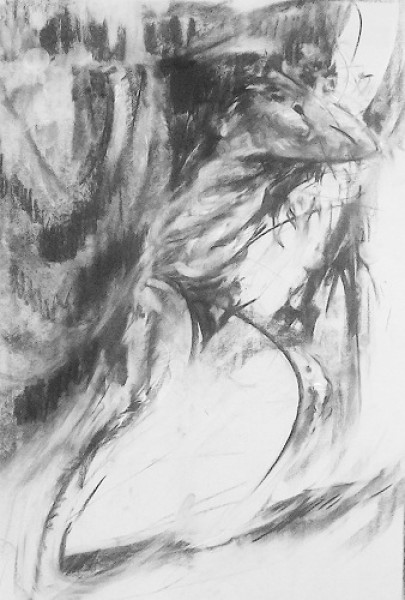 Admiration for other’s work ultimately becomes part of the amalgam that is me, the individual artist. I remember during a drawing class when I was in college, there was a student who drew magniificent figure studies with a very strong, structural emphasis. Everyone in the class tried to emulate her way of seeing and I was tempted to do so also. But my stubbornness wouldn’t allow it and I stuck with my swishing and swooshing lines of motion and kinetic energy. It wouldn’t have hurt to do a few pieces her way, but it wasn’t me, I knew that even then I guess. But I learned something from her work that helped my own. I guess it’s not just what I may hear that stays with me.

“If you quit after ten or forty days, you will NEVER get to the good days.”

Susan Holland
The Painter’s Tongue is a visual arts journal with an emphasis on philosophy and a focus on the artist’s own words, and seeks to bring like-minded individuals together for a meaningful exchange of ideas. It is my "thinking out loud, if you will, my personal search for meaning. TPT welcomes contributors as Guest Authors or through Speaking on Art, an offering of article excerpts from around the World Wide Web. Read more...