The Shapes The Thing: What Seeing Through Impressionist Eyes Taught Me

The act of drawing is no longer a significant pastime of mine. Once I read Charles Hawthorne and Henry Hensche (introduced to me through Lois Griffel’s book Painting The Impressionist Landscape), on their “spots of color,” seeing shapes became much more natural than seeing outlines of shapes. This is a better way to see because you take in the whole composition rather than detail. 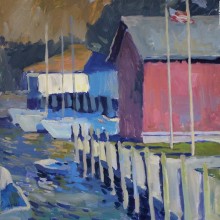 There is another advantage to this “way of seeing”. These American Impressionists taught their students to see in progressively smaller shapes/spots of color. It’s almost like the gradual pixilation of an image, from large to small; once you have the spots of color down, they said, one will be surprised at how little else (meaning detail) is needed. Also part of this philosophy, value and hue are considered together, not separately, and so if you get the color right you also get the value right.


In addition to the Impressionist ideas on color and light and how to portray them, I learned to see masses of shapes all at once. A shape-oriented mentality sees comparisons and relationships necessary for accurate rendering within the entire image, within the entire composition, more readily. When you draw a line it’s easy to become fixated on that one spot–where point meets paper–and not look how it relates to the whole.

It’s like washing on shapes of color from the inside out, using the brush to indicate the edge after, rather than starting with the edge, i.e., a line, and working inward.