Influence: The Process Of Originality

However much I want to believe that I'm the proverbial "fiercely independent" artist, it's the influence of other artists that gives me new ideas. Not only other artists,  of course, but all experience feeds my way of thinking which ultimately shows itself in the work I do. I can still hear my freshman design professor saying, “you cannot create from a void.” Great notions are the most basic.

There is scientific evidence that humans, over the millennia, advanced culturally, technologically, etc., due in great part to other human influence. I guess this is in comparison to the idea, for example, that man has become progressively more intelligent through evolutionary forces. It is the coming together of new ways of thinking and varied ideas, it appears, that leads to man’s real growth. 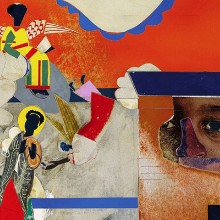 The Block by Romare Bearden

Think of the development of any piece of mechanical equipment. Why, I ask myself, was it necessary for man to go from a simplier version to a more complex one; why couldn’t he foresee the latter from the beginning. It is the layering on of new ideas that feeds progression.

Now, if I rely too heavily on outside influence as being “right," I can sometimes believe at face value; I may take it for granted that this or that is beauty, that this way or that way is the correct procedure for painting. This is easy because it doesn’t take much energy--someone else has done the work--the exploration--for me.

Practically all great artists accept the influence of others. But... the artist with vision... by integrating what he has learned with his own experiences... molds something distinctly personal.
Romare Bearden

It's natural for me to want to paint like artist’s whose work I particularly admire. One brutally honest artist, that I read recently, said she looked at a scene until she saw it like another artist might interpret it. This is true; I catch myself interpreting a scene the way an artist I admire might do it.

My goal, though, is to create a personal vision - to see and interpret my way. This takes effort and confidence. I believe unyielding advance is the path to enlightenment; perseverance is the key to belief in, and development of, ones own voice. It is a process. I try to not just lower my head and go, but I attempt to proceed intelligently with the guidance of those that have gone before me.