Between The Painted Lines: Finding My Place En Plein Air

When I go out driving, looking for places to set up my easel and paint, I very often start feeling quite claustrophobic. The roadways keep me nice and tidy between the painted lines. I feel like a mouse running through a maze, who must turn this way or that, with my path already set before me. There’s no veering off the appointed way, no more Walden. 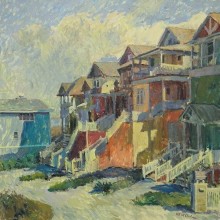 Land is either public or it’s private and, it seems around here, the private land has the better views. Oft times you can’t see nature past the condos and villas, like the mouse can’t see above the walls of it’s maze. And I’m a little gun shy now, even on public property, after having been removed from the bridge overlooking the Morehead City port (FYI–they don’t like you photographing the port).

I’ve concluded that there are two places yet to be claimed–still relatively free to explore–the sea and the air. What a neat trick it would be to complete a painting while sky diving; it would give new meaning to the term “en plein air”. But, until I get up enough nerve to jump out of an airplane, that one is on the back burner for now. 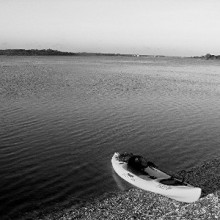 Presently I’m focusing my efforts on getting on the water with my kayak set up for painting en plein air. There are fishing kayaks, ocean kayaks, recreational and white water kayaks; why not a painting kayak! I should be able to get to just about anywhere I want to on the water without worrying about trespassing on private property. Free at last!