All artwork this article by Elena Roush

Art and Fashion have always been indissoluble from my life. I obtained my M.A. degree at the Kiev Technological Light Industry Institute (now the State Academy of Light Industry). I worked for the Kiev Fashion House before returning to my alma mater, by invitation, as a full time faculty member. There I taught Advanced Drawing and Painting, Art Design, Fashion Design, Special Composition and Marketing Research. 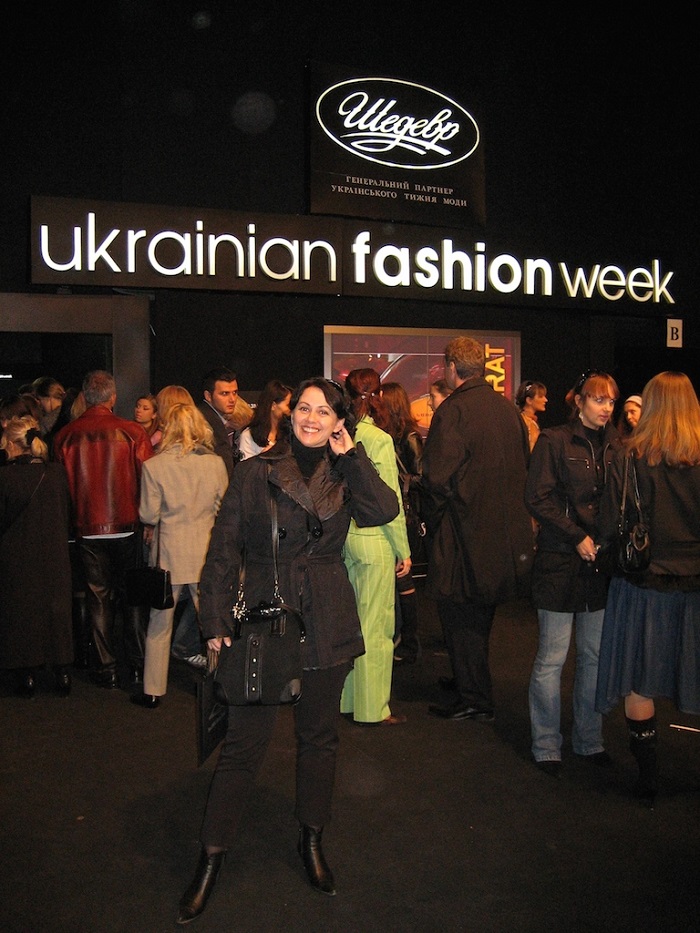 Even with rapid career growth at KTLII, I decided to start my own business in Fashion. I was working day and night to achieve my goal. I took part in International contests, participated in TV programs, and attracted many clients, students and admirers.

Coming to America
I would never have left my comfortable life if not for my daughter Olesya. In 2004 she finished Kiev State University and decided to continue her studies in the United States at the University of Utah. When she left I felt all alone. At that time I had been divorced about 10 years. I had no one with me, no one close. It is difficult to explain; so many people around you but nobody with you.

I started visiting Olesya in the States, and in one of my visits met a man who asked me to marry him. We are together now 6 years, have a house and an extremely smart, black labrador. My daughter received her PHD in biochemistry and is a second year medical student at U of U. She is married to an excellent young man.

Just a difficulty
Everything would be perfect if not for my health problem. In 2009 I learned I have thyroid disease and  advanced glaucoma. Even after multiple surgeries (11 from 2010 to 2014) my doctor told me he is not sure how long I will be able to see this world. He said he had never seen so young a person with such advanced glaucoma (I almost lost my left eye).

Provence and Vase with Sunflowers

But God let me survive and saved my vision for now. I have to continue to live. And to live means to be active, how I was all my life. For me, to live also means to paint every day, and do my fashion design. In 2014 I did all of the fashion design for my daughter’s wedding. I made all of the dresses, including the wedding dress, and all the decorations. I have new clients now and admirers of my art here in the US. I am selling my art on Saatchi Art. I have had a number of exhibitions and my paintings are now in private collections all around the USA. I never give up before difficulties and I consider my problem with my vision just a difficulty.

Motherland
My heart still aches for my motherland Ukraine–I live so fare away now in West Valley City, Utah. I don’t know when I will be able to visit her again, but I wish to. I still have my father (he is 89), my sister Natasha, 2 nephews, hundreds of friends and a very nice condo with an amazing lake view in Kiev–the most beautiful city in the world.

Center of Kiev’s downtown at night

Podol (Kiev) one of the most ancient parts of the city

Church of St. Nikolay (Kiev) where I was baptized

Kiev is also a very ancient city ( more than 2000 years old) with a population of about 4.5 million. How can you not be creative living in this city. It has amazing architecture, beautiful streets, squares, parks, lakes, the Dnieper river, and there is always so much going on. 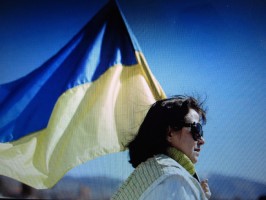 Politics
I try to be a social person, but I have never had much connection to politics. But like a good child never leaving her mother when she is in trouble, a good person cannot leave her motherland in trouble either; and now Ukraine is in a big trouble. I am against the violence that already has been organized on Ukrainian territory. Russian president, Vladimir Putin, came with military aggression, took Crimea (it is 15% of Ukrainian territory), and is kindling a war on the east of Ukraine.

My people in the motherland are fighting and dying for their independence and freedom. Ukraine will never be a part of Russia; never! We have already lived in the former Soviet Union. My daughter does not remember that time, she was just 6 when Ukrainians started to build an independent, sovereign country named Ukraine. But I remember the Soviet Union very well. It was a terrible time and a terrible country. Putin is trying to build an empire similar to the old Soviet Union and then will try to take over the world. He is the new Hitler and will never stop just at Ukraine.

“I believe if people from other countries and their governments can understand this situation early, right now, they will help Ukraine to fight Putin’s aggression, and peace will be saved.” 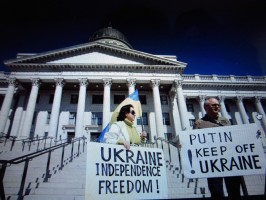 On the steps of the Capitol

I am involved in peaceful meetings for support of Ukraine. I took part in a peaceful demonstration, near the Capital building in Salt Lake City, in March of this year. I brought with me two signs which I made at home the night before. Also, my daughter gave me a Ukrainian flag which she had brought over with her from Ukraine. There were no other demonstrators there for almost an hour, just me and 3 journalists. They asked me many questions about the situation in Ukraine, and I was answering.

In the final moments of my solitary protest my friend, Yuriy, joined me. There was a big article in the Salt Lake newspaper, Deseret  News, entitled Ukrainian Woman Stands to Support Her Motherland. This all made me pretty legendary in my neighborhood and among the Ukrainians. 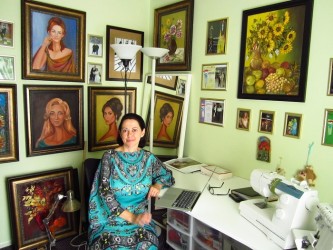 Open Studio and Solo Exhibition
I love to travel. During my professional life I have visited 17 countries (some more than once) on business and as a tourist, including much of Europe, Egypt and the United Arab Emirates. That’s why I consider myself an international artist. In my painting I try to reflect everything I have experienced and lived through. I gladly share my impressions of everything I’ve seen all around the world. I love painting the beautiful landscapes 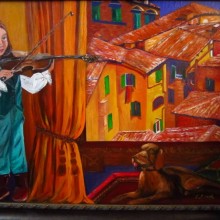 and cityscapes of the places I’ve visited and the interesting people of different nationalities I’ve met.

My August 24, 2014, Solo Exhibition, featuring 85 oil paintings on canvas, is dedicated to the 23rd Anniversary of the Independence of Ukraine. I’m inviting all my Ukrainian and American friends and neighbors, artists and others, and everyone who loves Ukraine, Impressionist art, friendship, good food and wine, and of course, Ukrainian music (more Info).