Art Meets Walter Keane: The Secret To Making A Living As An Artist

A couple of things struck me solidly from watching the movie Big Eyes last night. It’s the true story of artist Margaret Keane, and her husband Walter Keane, and how he assumed her identity as creator of her big-eyed waif paintings. It focus’ on her struggle with succumbing to Walter’s flamboyant personality, and with being a woman in a male dominated art world.

Incidentally, Christoph Waltz, whom I remember fondly from his masterful portrayal of Colonel Hans Landa in Quentin Tarantino’s Inglourious Basterds, again entertained magnificently as Walter Keane, as did Amy Adams as Margaret. The contrasts set up between these two by director Tim Burton are very interesting to watch and are the crux of my impressions here. 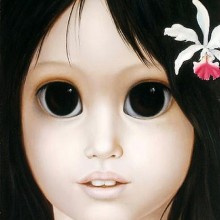 My first revelation from the film was when Margaret (Adams) was attempting to describe to Walter (Waltz) why she painted the big-eyed waifs. Walter feared being asked the same question by a patron or critic and not being prepared with a credible answer. Margaret said it was emotional–the disproportionately large eyes of the children in the paintings expressed how she felt at the time. She said that it came from within her.

What impressed me from this interaction was Margaret’s total commitment as an artist. She was the opposite of her husband who’s main goal it was to appeal to the crowd. I’m sure she wouldn’t mind her work being appreciated by others, but that wasn’t what she was about, or what her work was about.


I hear many artists talk about wanting their work to connect with people. They want their work to make people happy or contribute in some way to society. While these are noble pursuits for sure, Margaret didn’t paint for others–she painted for herself. I am the same. Connecting is nice but it’s not why I do it. One could do many things to make money. I paint for me.

The second thing that stood out for me from the film was Walter’s amazing “gift of gab”. His ability to promote himself was amazing. Maybe it seemed so to me because I am an introvert by nature and have never felt comfortable in this realm. I think what Walter lacked in scruples and art talent he made up for in marketing.

It may seem obvious but it’s a lesson that, once the work is done, another hat must be donned, that of the promoter, if one wishes to live off of their artistic efforts. Many right brainers frown at the mention of money or capitalism in the same breath with art; capitalism is seen as art’s evil nemesis. But the secret is that art and business are separate but necessary in the pursuit of earning a living from our craft. Like Margaret and Walter, they are the separate, but inseparable, ingredients to our livelihood. I really think that Walter could have sold those big-eyed waifs no matter whose signature was on them.