Any Buttocks Will Do: The Importance Of Intent

“I found the genre (still life) to offer all the raw material required for the deepest levels of expression.” Karl Zipser

One aspect of Impressionism and Post Impressionism–those “ism’s” known for their attention to light and color–is the refuting of the “grand theme”. Van Gogh painted old shoes, Monet painted haystacks; no longer was the subject, the subject. No longer was the artist focused primarily on the depiction of some major event. I believe it was Renoir who said, “any buttocks will do”.

Oath of the Horatii by Jacques-Louis David

Raft of the Medusa by Theodore Gericault

But even the Impressionists, in their fervor to denounce this idea that painting must be of some magnificent place or thing, were in reality just changing what the theme was. For them the “grand theme” became light, and what a grand light it was.

A Pair Of Shoes by Vincent Van Gogh

Intent is such an important aspect of art making, maybe of anything we do. And intent, in addition to being specific to various aspects of the process, can be generally synonymous with theme. It seems to me the more focused the artist’s theme the more powerful the work.


Far from collapsing into dull representation of specific objects, the painted still life can be transcendent of the mere physical forms it depicts.    Karl Zipser

I see and translate my imagery using Impressionist techniques–edges are formed with loose brushwork and atmosphere is created with color, for example. But my ultimate aim is not necessarily to capture a moment in time–in the sense of a time of day. My paintings are a moment about something unspoken, about the internal and the eternal at once–“the human condition” that happens to be colored by an Impressionist’s mentality, however adulterated that mentality may be. 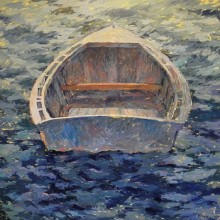 Victor Frankl said, “Even a dwarf standing on the shoulders of a giant can see farther than the giant.” In that vein, my aspirations are to something other/deeper/more than light for light’s sake. This being the case then I too have a “grand” theme.

I pursue harmony and beauty, and the strength of shape and value definitely draws me in, but there is another aspect, that afore mentioned deeper something, that the painting is really about.