ACCOLADES FOR THE LEFT BRAIN

It’s more and more apparent to me the importance of logical, analytical thought as part of the process of doing art. I’ve always seen “Art” as mostly in the realm of feelings and emotions, that to be an artist meant embracing primarily that area of the brain that regulates the indefinable and unmeasurable. I’ve been a bit naïve.

Hard won skills and knowledge come only from the practical—practical exercise of one’s faculties and the systematic thought necessary in practice, practice and more practice. But this is not about practice I don’t believe (I certainly remember doing studies at university). I’m still thinking on this concept so I know I’ve only scratched the surface of this new epiphany, but I see that I mustn’t only react intuitively, I must use all my cognitive faculty. This goes for art in general and for each specific work.

I’m not implying that the feeling side of things is lackadaisical or unreflective, nor do I consider it synthetic or false, as apposed to the analytical, which, in my mind, assumes fact. I’m saying there is a necessity to think logically and intuitively at the same time, maybe using one sense or the other a bit more at different moments in the process. 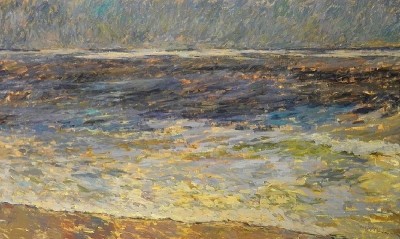 This all became so very evident to me when I was talking to a friend/relative who happens to be a psychologist. For some reason listening to his logical and analytical take on things hit me as amazing; how could someone who deals with the mind be so reasoned? Why this was so amazing I’m not quite sure except that maybe I have always been under the impression that things of the mind, including art, live in a dimension that cannot be thought about analytically. Or maybe I am so far over on my proverbial “right-brain” that this is just the way I think in general; I do go on feeling most of the time, except maybe with balancing my money accounts, which reasonably I despise doing. I know I am generalizing the brain to left/right hemispheres to represent thought vs. feeling as well as verbal/non-verbal abilities; I’m not sure this is physiologically correct.

Again, I don’t think this is the same thing as practicing hard and then letting things flow when working. This seems different (there I go relying on feeling again). This is more along the lines of what is necessary while in the doing–while in the fray.

Image: The Sound Of Surf 40×66 acrylic on canvas MTMcClanahan

“I’m in my own world when I’m creating. I lose all…physical pain when I’ve left the here-and-now to reside for a while in a place without boundaries.”

Ruth Anderson
The Painter’s Tongue is a visual arts journal with an emphasis on philosophy and a focus on the artist’s own words, and seeks to bring like-minded individuals together for a meaningful exchange of ideas. It is my "thinking out loud, if you will, my personal search for meaning. TPT welcomes contributors as Guest Authors or through Speaking on Art, an offering of article excerpts from around the World Wide Web. Read more...