Illuminating An Old Art Form: Quilling Has A New Light

The art of Quilling, or paper filigree, can be traced back to Ancient Egypt.  The technique of rolling paper to create decorative effects on books, cards, screens, frames, etc., however, reached its peak during the 16th and 17th centuries in Europe among the religious and gentry classes.  It remained dormant in practice between its peak and early 20th century, when it experienced a revival.  Now there are quillers around the world, including the United States. 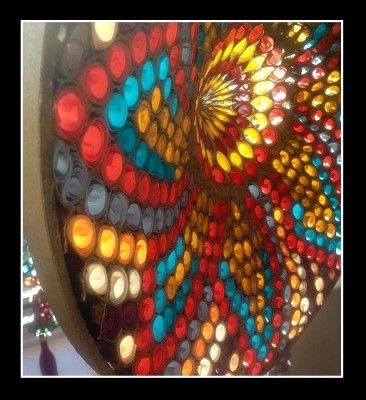 I discovered the art while working for the federal government in Washington, DC about four years ago.  As an environmentalist, I was looking for ways to recycle the Post-it notes at work.  One day I started rolling them with my fingers and was pleasantly surprised by the shapes I could make with them.  Eventually I found a hand-held tool that would facilitate the rolling of the paper and mastered the technique.

Almost all of my quilled pieces, including jewellry, resemble stain glass when placed in front of natural or artificial lighting."

Over a period of four years I invested considerable time and money into experimenting with paper and making it more "acceptable," i.e., higher in quality, as an art medium.  About eight months ago, I found a material -- industrial strength cardboard -- in the recycling room of my apartment building that transformed my quilled pieces into illuminated objects.  This material not only provides a more durable architectural structure for paper, its flexibility allows the artist to mold it into shapes that can be naturally illuminated (see attached photo).  Almost all of my quilled pieces, including jewelry, resemble stain glass when placed in front of natural or artificial lighting. 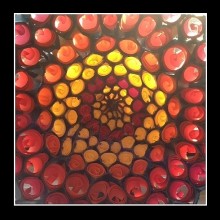 There is no evidence that the founders (or even current practitioners) of this art were aware of its illuminating properties.  This lack of evidence could be due to the type of paper used in the creations.  Having worked with several different types of paper, pastel paper has proven to be superior in illuminating properties compared to other types.  If a quiller is not using pastel paper, s/he may be limited in seeing the illuminating possibilities.  Moreover, decorative arts remains the main application for quilling.  Placing the quilled pieces in front of light may have just not occurred to past quillers, because it was not necessary to fulfill its purpose.

All it takes is a change in an angle or approach in technique to transform an old art form into a more contemporary one.  Play with an old art form  -- throw it up into the air and see where it lands.  Your eyes may discover something that eyes before you did not see.

Contemporary quilling artist Jennifer A. Lambert is passionate about light and color. She works with fabric and paper to create pieces that celebrate both to their fullest.

Contemporary quilling artist Jennifer A. Lambert is passionate about light and color. She works with fabric and paper to create pieces that celebrate both to their fullest.