For Whom Do You Create: Michelangelo Finds His Form

I’ve read many artists say they want to show the viewer, through their work, what they, themselves, feel. That is the gift of strong sensitivity (and sometimes a curse I would argue). The intensity of a green meadow, the beautiful blue of the ocean, the stark contrasts of a still life, or the power of a simple line—these inspire the artist to work. Then, in turn (or maybe before, I’m not sure), corresponding emotions pour out and feed the work; feeling is the work—what I wish to “show”.

In the movie, The Agony And The Ecstasy (from Irving Stone’s book of the same name), in a scene where Michelangelo (Charleton Heston) was painting the Sistine ceiling, it showed the transformation of the artist’s thinking–from painting what was traditional and expected, to reaching inward and demonstrating what he felt about the subject and about himself.

From Robert Baldwin, of Connecticut College: 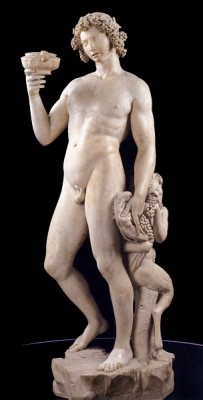 “[his] earliest works showed a self-conscious attempt to work in an “authentic” antique style. It was the beginnings of a long interest in studying and transforming the sculptural aesthetic of classical antiquity.

Michelangelo’s most “pagan” early work which survives is the life-size, nude Bacchus of 1496-8, sculpted for the garden of a Roman banker, Jacopo Galli. The Bacchus should be seen as another “classical antiquity” made by a Renaissance artist, or, rather, as the self-conscious display of an artistic virtuosity capable of absorbing and recreating the sculptural language of pagan antiquity.”

This particular scene from the movie has always stuck with me. Michelangelo saw man as God’s image and placed the human form on a high pedestal. I don’t know how suddenly this switch happened for the artist, but it shows the artist’s desire to give form to what he is experiencing. 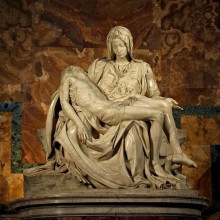 This is common for artists pursuing a personal voice–learning through emulation. Then, when the skills are honed, the real expression can begin to take form. It’s the basis of Fine Art teaching at universities–to first develop the craft in order for the student to finally express himself freely.

I was thinking the other day that, when I am inspired by some scene, I usually exaggerate to adequately show what I am feeling and seeing. I don’t really know why there is this desire to create visual proof of my experience, but it is very real and very strong. I think I would do it even if there was no one to see the results. So I see the finished work as being really for the artist first, for me.

That’s what allowed Michelangelo to change his thinking. If he had been painting for others he would have stayed with the status quo—he would have given them what he knew they were expecting. But the work became his, represented what he saw, what he believed.