Digital Icon: A Portrait Of The New Evolution

Comparable to the pace of technological advancement is that of human evolution. Both have accelerated at an unprecedented rate in the last few decades.

Increasingly reliant on technology, the human mind now interacts with technology as an extension of the brain rather than using it as an external tool. This shift in human functioning has also transformed our psychology, leaving the main characteristics of Homo Sapiens behind and entering the next phase in our evolution, Homo Cyberneticus.

Many are still unaware that Darwinian evolutionary paradigm has now officially ceased to apply to our species, yet the next stage is already upon us. That is the stage at which technology is inserted within the body. It is coined Homo Roboticus. Moore's Law predicted the exponential speed at which the size of microchips would decrease. It is now a reality that minute microchips are inserted within the body to maximize human functioning. Nanotechnology already improves the lives of people with disabilities or serious injuries.

Now is the critical time when, as a species, our evolution falls into our own hands."

As evolution shifts away from nature's control and becomes increasingly bound to the influence of technology, an unprecedented sense of responsibility emerges. Now is the critical time when, as a species, our evolution falls into our own hands. And as the dominant species, life on Earth is dependent on human activity. No longer can we passively expect nature or otherworldly forces to ensure our survival. This is when the human species reaches adulthood, becoming fully conscious in a process of collective self-realization. 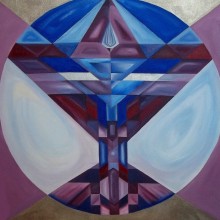 Digital Icon is a portrait, yet is abstract enough to represent any human living in this exciting, yet uncertain time. A blueprint of the new Human, with a scientific mind, taking evolution in its own hands. It reflects our rich and complex experience as we shift away from nature's cyclical and predictable patterns, towards an increasingly technological world that yields both promises of swift solutions and impending disasters.

Digital Icon faces the future in a novel context, a pixelated universe. Pixels that radiate outwards, merging seamlessly with its environment. A being that exudes both power and wisdom as it pushes the boundaries of its cognitive ability, armed with scientific prowess. Cataclysmic threats are confronted with a direct, determined gaze. This being explores the nature of it's existence as it faces it's greatest challenges yet.

This painting is one in a series. Imagery that emerges from new psyches, at a time when several stages of human evolution overlap. A secular iconography based on a common logico-rational language and egalitarian values focused on the future rather than the past, Digital Iconography encompasses a vision for a world beyond dogma, where freedom of expression unites all people towards a deeper appreciation of our own intrinsic sacredness, hence clarifying our place in the world amongst all other manifestations of life.