Bad Artists Compliment One Another

I can’t remember who said it–“bad artists compliment one another”–but when I first read this quote it worried me. I immediately scoured my brain for past niceties I may have lavished upon fellow artists. I asked myself, “Have I ever complimented someone? Does that mean I’m a ‘bad’ artist? Is this the litmus test to judge myself by?”

I became a bit obsessed with it; almost every day these biting words ran through my head. Even now they come to mind when I start to tell someone that I admire their work.

I did always wonder, though, if what first appeared to need no philosophical interpretation was in reality a metaphor for something much more grand. “Admiration for another’s work surely can’t be a sign of one’s failings”, I thought. “Was this really what the author meant? Should I take it that a “bad” artist will compliment another “bad” artist, that maybe mediocrity can only see to it’s own level of mediocrity, and so it admires like kind.” 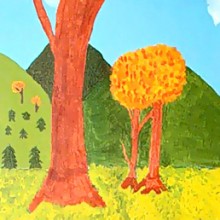 Two Trees In Love by Julie Seelig from MOBA

I think because I was able to gradually lay aside my insecurities that another possibility finally emerged. Slowly, and then suddenly, the opacity of fear gave way to the transparency of humility, and of experience and time, revealing that which had evaded me deep within these slapping words of condemnation.

I was looking at another artist’s work, admiring it and hating it at the same time. What seemed to hold much potential in ability also seemed stuck in a mindset of, what I would call, predictability. “Could a ‘bad’ artist”, I thought, “be one that does not struggle to be authentic?” It doesn’t matter whether the artist is just starting out and riding the learning curve of seeing through other’s eyes, or if he had long settled into a perpetual cycle of same (intentional or not), the results may just be what my author friend meant by “bad” art.

It seems almost an insult to the open mind  to call oneself an artist that placates himself in ignorance and pride, but I believe everyone does it to some degree; it is impossible to avoid completely. Compliments of like minds, shutting themselves off from truth, perpetuate comfortableness. To lay down your shield–your protection against fear of hurt and shame–and go boldly, seeking truth, this is what an artist must do.

Finding my personal and unique voice through creative means requires that I strive to rise above my current ability to do so, to see more clearly, each day. It is said that “a dwarf, standing on the shoulders of a giant, can see farther than the giant”, and I think it would hold also that an artist can see farther standing on the shoulders of his own efforts. But there must also be the humble realization that he can only see as far as those current efforts will allow; he has not “arrived”, as it were, nor will he ever.

I guess it could be said that there is no good or bad art, but only those in a process of growing. But there is an objective reality to the artist’s progress that can be judged truthfully, that he must judge truthfully in order to grow beyond his current station.

I have to wonder how much I, personally, placate myself with the knowledge of what is acceptable and good in other’s eyes. How much do I dare to be myself? How much am I stuck in a cycle of mediocrity, where mediocrity is defined as the lack of authenticity? How much do I believe what my eyes have seen instead of what my heart tells me? It is dangerous to our growth as an artist to underestimate the power of peer pressure, even as adults, and the strength of self esteem.

I would love to hear what this quote means to you, and who it may be attributed to?

“I’m in my own world when I’m creating. I lose all…physical pain when I’ve left the here-and-now to reside for a while in a place without boundaries.”

Ruth Anderson
The Painter’s Tongue is a visual arts journal with an emphasis on philosophy and a focus on the artist’s own words, and seeks to bring like-minded individuals together for a meaningful exchange of ideas. It is my "thinking out loud, if you will, my personal search for meaning. TPT welcomes contributors as Guest Authors or through Speaking on Art, an offering of article excerpts from around the World Wide Web. Read more...