Making art every day can be draining; yes, making art can be hard. It becomes repetitive when it isn’t working, frustrating, tear my hair out and teeth-grindingly difficult. If I fluff it up because I needed to focus more, then sometimes I end up wanting to roar at the canvas, not tut quietly. Ha! Does anybody else really struggle (like me) trying to explain to the family just how shattered I am, when “all” I’ve been doing all day is paint?

And many a time I’ve sworn at myself because it didn’t
work during the first attempt.”

However, this occasional battle is not a “given” in order to yield results. I normally find that doing commissions i.e., portraits, require my complete attention–utterly. And many a time I’ve sworn at myself because it didn’t work during the first attempt. It’s not always the case, obviously, but fairly often I’ll have to work really hard to achieve a likeness. If my hand is confident and sure however, I’m not going to complain or feel cheated in any way. Practice makes perfect as they say. 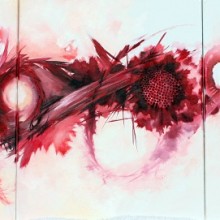 The act of making abstracts on the other hand, which I do for pure pleasure, is interestingly the complete opposite. They are a stark contrast to portrait painting and, unless I’m having a block, also a sheer joy. Yes, they challenge me as well, and are no less technically demanding–plastering paint around, mixing, going with the flow–that’s exhilarating, regardless of whether I scrape it all off at the end of the session. It’s always the journey isn’t it?

Regularly I will reach that space though, zone, call it what you will, “runner’s high”, where everything is suddenly slo-mo–determined, deliberate–I’ll suddenly find myself a spectator, watching, fascinated as my hand does the work. That happens.

Making art is different every day. I’m addicted. If not painting, then I’ll draw, if not drawing, then I’ll be reading about it. The struggle is the thing; sometimes it’s sophisticated and easily conceived, at other times I feel like I’m fighting a losing battle. Making art is emotionally and even physically taxing, but so rewarding on the last stretch.

I must confess that half the time I don’t know what
the outcome will be.”

I wish I could end up with what is in my head, but it never concludes the way I originally envisaged it upstairs–my paintings tend to unfold. I live in the moment, does that make sense? I must confess that half the time I don’t know what the outcome will be. That goes for my portraits as well as the abstracts. Even though (and i do joke that I may have a slight OCD tendency) I do an exact under-drawing for each portrait commission. Perfectionists eh? The old adage “noone said it would be easy” is true enough. And I’ve yet to meet an artist who doesn’t admit to that struggle; it’s got to be global. 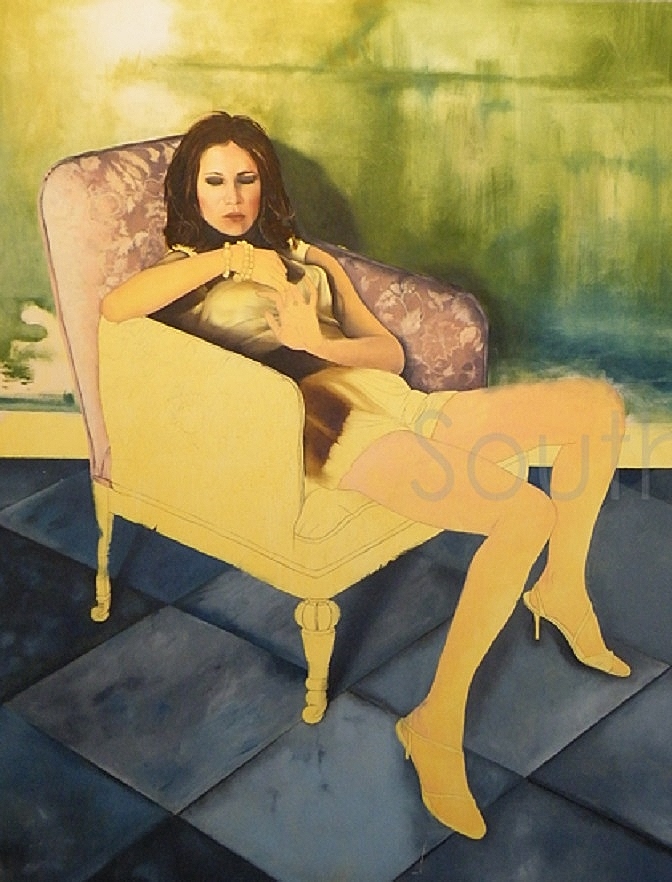 If you are an optimist then, obviously you will look at the world differently, say, to someone with bipolar disorder. I’m an optimist! My take is, that because we are unique, some people focus more on their woes than on the good things in life. It’s human nature to worry/be concerned.

Your attitude to life defines you in many ways. We remember the bad times in much greater detail than the good times–fact. The struggle, if there is one, if you choose one, is about getting it right, because if you get it right the first time, then you’re the winner, tadah! If you get it right the second or third attempt, then you’re eventually the winner. I want to succeed, therefore I must master this.

Sometimes, I have to admit defeat too and leave it to the next day, but it’s human nature to want to excel. That doesn’t mean I can’t be complacent too, or slovenly. But fundamentally, we don’t want regrets. They’re exhausting. I suspect that sometimes we sabotage and put obstacles in our path, subconsciously, if it’s all too easy. Everything was going so smoothly…until I decided to…and then we begin again. I’ve overworked a painting countless times, even though every fiber in my body knew that it was resolved. I just had to do another tweak, and another…

For some it’s much bleaker than that.

A firm friend of mine has manic depression. I rented a studio in her gallery a few years back; her studio was in the attic of this wonderful old Tudor building adjacent to mine. She never went in there though. Busy downstairs. When I pressed her on why she didn’t practice anymore, she shrugged and said: “I take pills to keep the big bad clouds from descending. I want to start again, but I just can’t.” Depression is an awful thing, and it’s quite telling

that some choose to explore this inner foe and others shrink away. Art as therapy is therapeutic–there are some extremely gut-wrenching stories out there. Abstraction during my days in Ireland had a cathartic effect on me and helped me grieve a death.

We crave more meaning and purpose. Is that the burden of intelligence?”

The banality of life I think is anathema to most people. Deep down we don’t want the truth of our existence to be meaningless (other than procreation of course). We crave more meaning and purpose. Is that the burden of intelligence? We artists are such a sensitive lot aren’t we? I wonder if that’s worth exploring, does it need to be a prerequisite to paint well–the tortured soul?

I’m very fortunate to have patrons that keep me occupied and out of mischief, otherwise I’d be on the computer all day–and we all know how easily a whole afternoon can slip by. I’ve had loads of days swallowed up on here. It is a wonderful, beguiling, necessary tool that I declare a sneaky passion for; I love looking at what artists are getting up to the other side of our globe. It all feeds back into my own practice of course.

One needs to know the rules before one brakes them. My daughter didn’t get Picasso, until I showed her just how technically brilliant he was. And then I watched the penny drop. That was satisfying. 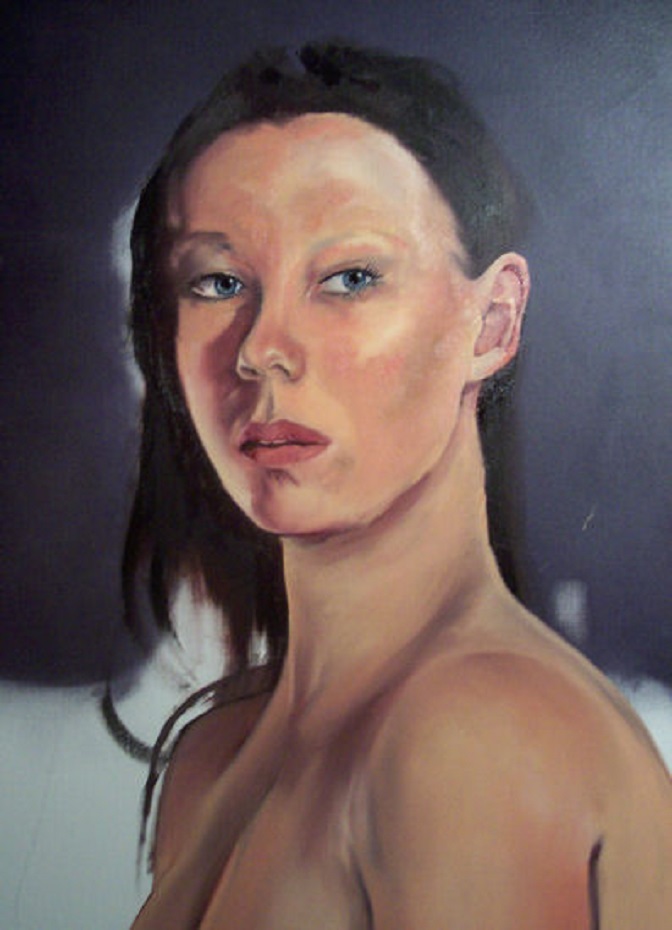 I believe I’m cocky (thick-skinned) enough to just paint and let others be the judge. As I said, it isn’t always a struggle for me; my abstracts are an urge or itch that I have to succumb to. And I love the journey, it’s seductive. It doesn’t have to be negative. Plus, I don’t think I’ll ever be famous enough to be compared to other artists. I do want to be successful of course. That’s just me using my loaf and earning a crust!

There are several artists who I aspire to, but will probably never even get close to emulating: Jenny Saville’s women, Francis Bacon and man of the moment Mr. Liepke, to name a few.

C’est la vie? You’re only as good as the last picture you produced. Even those right at the top of this game will be secretly fretting. If I wanted to expose my ugly demons to the world, then I’d have to be mentally ready to first face my inner fight and then embrace public opinion of it as well. The media are a frenzied bunch at the best of times; there’s constructive critiquing…and then there’s a public lynching. I understand that we all need confirmation from time to time that what we do is worthy and relevant. But I’ll stick with the buzz that I get when I enter my little studio, and if people don’t get me, then, hey, that’s odd–they’re the ones with the problem!

I was born in Aldershot, Hants, but grew up in Germany as my Dad was in the Army. Married with two children, I've moved around a lot with the family as my husband is also in the Armed Forces. Army life is sometimes demanding--but it also informs my work. Between living in Germany, Ireland and England I've realized a dream and completed a degree in Fine Art. Being an oil painter was all I ever wanted to do.

I was born in Aldershot, Hants, but grew up in Germany as my Dad was in the Army. Married with two children, I've moved around a lot with the family as my husband is also in the Armed Forces. Army life is sometimes demanding--but it also informs my work. Between living in Germany, Ireland and England I've realized a dream and completed a degree in Fine Art. Being an oil painter was all I ever wanted to do.